With the use of SIL2 rated frequency counters, inductive sensors and either a single or dual solenoid system within the hydraulic pack, COS-1 will automatically de-energise power to the solenoids and therefore release hydraulic pressure from the on-board braking system, should an over-speed condition of the conveyance be experienced.

The EUC ( Equipment Under Control) hydraulic circuit in turn lowers the EUC onto the designated rail braking system. The COS-1 will display the speed at which the EUC is travelling and give indication of either healthy or tripped status of the over-speed system. A Speed Monitor Selection switch is used to interchange between sensors an frequency counters, that are being displayed on the Speed meter. Failure of either one or both of the inductive sensors is monitored and alarmed and will cause the EUC to apply the on-board braking system.

THE SCRIBE has been designed to assist in logging the Radio Frequency (RF) signal being received from a Mine Winder Conveyance, in order to give site personnel the ability to detect low RF signal conditions without the need to have specialised test equipment and specialist personnel on site.

THE SCRIBE can avoid expensive winder downtime during instances such as unscheduled aerial repair, realignment or rudimentary fault-finding. The ability of importing data into Supervisory Control and Data Acquisition packages (SCADA) also allows for tolerance alarming in the event of an expected RF signal vary from mine prescripted  pre-set datum levels for a given location.

The RF signal, received by the device, is converted and provided as an analogue 0-5 V DC output to the winder control PLC. In order to capture the RF spread of a typical winder’s SMS transmission throughout a shaft or drift, the device has been ranged typically over 60dBm sweep. As most installations rarely have signals higher than -40dBm or lower than -100dBm, this spread will enable the capture of the total distance-travelled signal plot for the majority of installations.

The accuracy of THE SCRIBE is better than 1dBm. The device can be manufactured to operate in one of the following frequency bands: 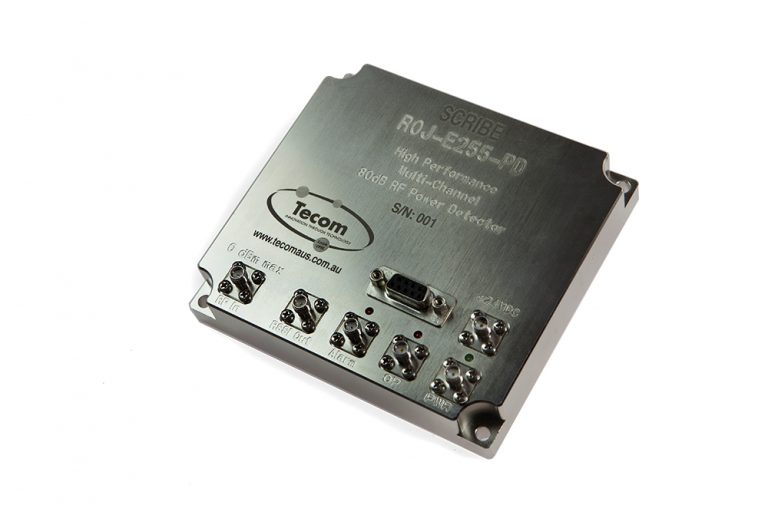 The Scribe - Technology for strength monitoring of RF signals.

COS1 Conveyance Overspeed system and other communication solutions Click here ...